During the morning  free practice we struggled with a defect battery, because of this Nick couldn’t show the potential of his kart, luckily the problem was during the free practice and we were able fixing the issue for the qualify session.

For the qualify session Nick was able to set the 7th place on the time table, this without any slipstream.

Nick had a difficult start and did not win positions, but after a while he saw the chance to start making the necessary overtaking actions,… in no time he was with the leading group,…  As expected it would be a very close race with a lots of contact, Nick was able to take the second place but due to a time penalty on for pushed in bumper of the winner of the race  Nick  could write the victory on his name.

Nick took the start from P1, important was to stay out of trouble and create a gap with the fastest of the field,… this worked well and in the last lap when Nick took back the lead, he was pushed by a driver who wanted to do something what was clearly impossible, Nick lost positions and ended the race as 3th.

Again Nick had to start from pole, because of the results of the 2 last races.  Just when the drives started their warm-up lap it started to rain, … so the drivers had to start on slicks in the rain and Nick had a good start but in the first chicane he lost his kart and went off track.  His kart stacked in the grass and Nick needed some time to get his kart back on track, by that time  the gap was too big to be any meaning for that race.

Overall weekend result still P3, (damage controlled), this first race on Nick calendar proofs the speed and readiness of Nick for the season 2017.

Thanks to Daems racing Team for the great support, my sponsors AMK Steigerbouw, C-Light Project and Ddprints, thanks to the supporters at the track and special thanks to my coach Jordy and Oswald Paret for the nice photos.

Next race on the calendar  BNL Kick-off @ karting Genk on March 12. 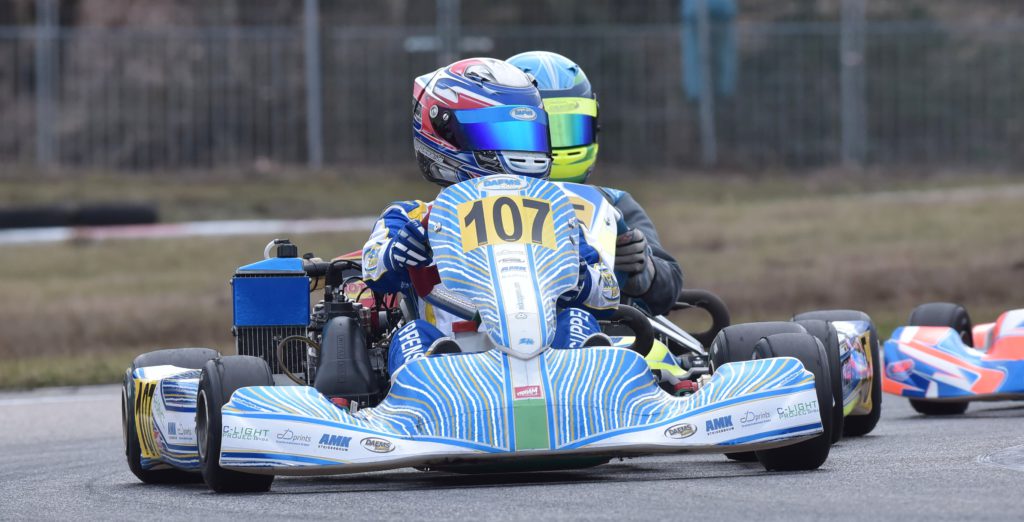